Skip to content
We have been working in the domain of socially assistive robotics — the design and evaluation of robots meant to help people through social interaction — for over a decade.

Co-Design of Robots for In-Home and Clinical Use by Adults with Depression An estimated 17.3 million adults aged 18 or older (7.1% of the adult population in the U.S.) had at least one major depressive episode in 2017. Since 2014, we have been working together with patients and clinicians in to inform the design of socially assistive robots that can provide support for and alleviate the symptoms of depression. In our earlier Participatory Design (PD) studies, we found that older adults with depression and clinicians who work with them can contribute to social robot design, that loneliness and the need for companionship are significant needs that they think social robots can help address, and that older adults and clinicians are interested in using information from sensors onboard the robot to reflect on their mental health status and everyday behaviors. We also tested how older adults with depression use socially assistive robots, in this case Paro, in their homes, and found that daily use can improve symptoms of depression (PHQ-9). 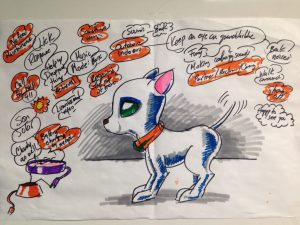 In our current NSF-funded study (IIS-#1900683), we are performing PD workshops with adults with depression and clinicians to customize the capabilities and behaviors of Therabot, a pet-like companion robot, to improve patient health and well-being. We are also working together to identify appropriate therapeutic interventions using this platform to address the needs of individuals diagnosed with depression.  The effectiveness of the modified robots will be evaluated in clinical settings and by means of longer-term use in patient homes. The project aims to  advance healthcare robotics and human-robot interaction through a combination of onboard sensors that provide additional information to clinicians along with artificial intelligence to customize the interactions of the robot with the patient. Researchers: Casey C. Bennett, Sawyer Collins, Jennifer Piatt, Sawyer Collins, Natasha Randall,  Lori Eldridge, Wynnie Chang, Shinichi Nagata, Cedomir Stanojevic

Studies of robot use in eldercare institutions  The majority of Human-Robot Interaction (HRI) studies have been oriented to one-on-one interaction in constrained and experimental settings. In this project, we use the socially assistive seal-like robot PARO to study how human-robot interaction develops in long-term use in the context of a local nursing home. We are particularly interested in seeing how different uses and interpretations of the robot emerge through naturalistic interactions between nursing home staff, residents, and visitors. Over ten years of scholarly and clinical study of PARO have copiously documented the robot’s positive psychological, physical, and social effects on older adults, including improved mood and decreased stress levels after using PARO. Our own studies expand on this prior work by exploring the interaction mechanisms and dynamics through which these therapeutic effects happen, particularly emphasizing how PARO is socially scaffolded by people and interactions in its environment and how robotic technology and its social uses and effects are mutually shaped in ongoing interactions. This project includes ethnographic studies and behavioral analysis of PARO’s use in a small Multi-Sensory Behavioral Therapy (MSBT) group, of people’s interactions with PARO in a public area of the nursing home to see how interaction develops voluntarily, the appropriation and emergent uses of PARO by the nursing home staff, and applying pet therapy practices to PARO to include it in regular activity in the nursing home. This research is funded by NSF IIS-1143712. Researchers: Swapna Joshi, Wan-Ling Chang, Selma Šabanović, Casey Bennett, Lesa Huber, Maria P Lopes, Sheryl Hamner 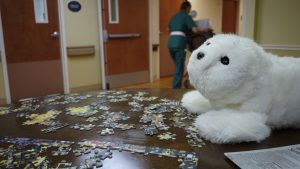 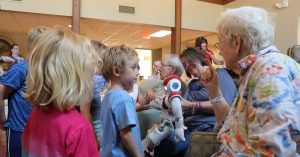