Our projects on affective robot design focus on integrating moods, feelings, and attitudes with robot design to improve human-robot interaction. 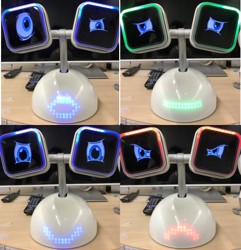 We study sound as a modality through which robots can express emotion, or which can affect people’s perceptions of robots. With the former aim in mind, we are implementing an Emotion Recognition Algorithm onto the robot Haru. It will be tested with both individual and group settings to monitor interaction. The purpose of this research is to use emotion-based data to improve design of “at-home” robots to create a better, more positive and natural interaction between humans and robots.

We are also interested in how the sounds robots make affect people’s perceptions and attitudes toward robots. In one study, we looked at whether the mismatch between the robots’ appearance (android, humanoid, minimalist) and their voice (human or robotic)  affected people’s evaluations of the discomfort, competence, eeriness, warmth, humanness, and attractiveness of these robots. This research helps to better understand the ideal types of appearances and sounds that are most receptive to the general populace when people interact with robots. 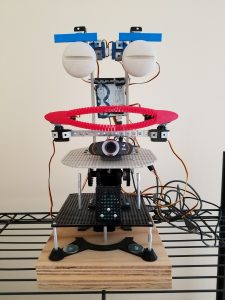 MiRAE (Minimalist Robot for Affective Expressions) is a robot face that can perform an array of facial expressions and neck motions. We use it to study various aspects of robotic face design and the cognitive mechanisms behind social human-robot interaction, as well as to develop inexpensive and replicable robotic faces for experimental purposes. The robot is specifically designed to be easily reproducible by incorporating affordable consumer electronics components. Through experimental studies, we seek to understand how certain design components –facial expressions, the degree of realism of facial features, and rhythmicity and coordination – affect human-robot interaction so that we can build robots that better interact with people in more natural ways. We explore the perception of audio as well as visual components of interaction using the robot in collaboration with researchers from Bielefeld University. 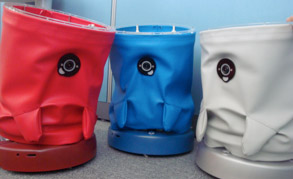 Robotic technologies seem to occupy a space somewhere between animacy and inanimacy; they are at the same time subject and object, tool and agent. An important issue for robot design is understanding how different factors relating to the design of the robot and the context of human-robot interaction affect people’s perceptions of a robot’s lifelikeness. Through several studies of robot motion and interactive behavior, as well as people’s predispositions toward empathizing and anthropomorphizing robots, we seek to better understand how lifelikeness can be designed and used in human-robot interaction.