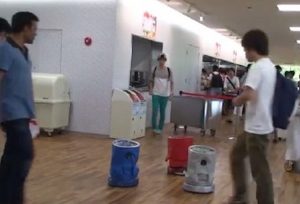 Many studies have been published on human interaction with individual robots, but few have examined how human behavior differs when individuals and groups interact with groups of robots. Studying groups is important because humans act differently when they are in groups than they do as individuals; people may particularly be more negative toward perceived outgroup members, or behave more competitively when interacting in groups than as individuals. We explore what happens when groups of humans and robots interact. We focus on how features of the robots (e.g., if the robots are human-like or machine-like) and of the interaction (e.g., if people cooperate with or compete against the robots) affect attitudes and behavior toward robots. We also study what kinds of interaction techniques and robot designs can improve people’s HRI experiences. We also seek to understand the ethical consequences of robots as members of human teams. This research is partially funded by IU’s Social Science Research Commons, the National Science Foundation’s Cyber Human Systems (CHS) Grant, and Computing Research Association for Women’s Collaborative Research Experience for Undergraduate (CREU).